Where to Find Some of the Most Famous American Flags

Where to Find Some of the Most Famous American Flags

With its 13 stripes and 50 stars, the red, white, and blue banner that serves as the flag of the United States is one of the world’s most recognizable symbols. It even has a slew of nicknames, including “Stars and Stripes,” “Old Glory,” and even simply “The Red, White, and Blue.” There have been many versions of the American flag over the years, but certain variations have a particular historical significance for United States citizens the world over.

The stories of the most famous flags are preserved in museums throughout the United States, but where exactly are the flags? In some cases, they are kept alongside the stories that go with them, but in others they may not be where one might expect.

It is widely accepted that, in 1776, Betsy Ross sewed the first United States flag at the behest of none other than George Washington. The flag she designed featured 13 white stars arranged circularly over a square blue background and alternating red and white stripes. The following year, Ross’s flag was adopted by the Second Continental Congress. This day, June 14, 1777, was established Flag Day (origins of this day are heavily debatable, but that’s for another time).

Unfortunately, our nation’s first flag isn’t around anymore, but that doesn’t mean Betsy Ross’s involvement in designing it hasn’t been properly acknowledged. In fact, the headquarters for Flag Day are in the Betsy Ross House, located in Philadelphia, where she is believed to have sewn America’s inaugural flag. If you go there, you’ll be treated to a tour, complete with actors and backdrops of that time period. 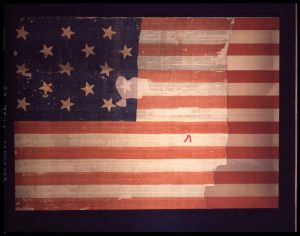 Every American knows that “The Star Spangled Banner” is the United States’ national anthem, and most know that it was written by a man named Francis Scott Key. While this is all common knowledge, it’s often overlooked that there was a specific flag that was the source of Key’s inspiration on a war-torn day during the War of 1812. The Star Spangled Banner flag was such a symbol of unity and encouragement throughout the War of 1812 that it became arguably the most beloved flag in American history.

One would assume that the banner and the anthem it inspired would be in the same place, but that’s not the case. If you want to see the anthem, you’ll have to go travel to Baltimore (where Key penned the anthem) to what is known as The Star Spangled Banner Flag House. Along with the national anthem, this site also features exhibits centered around the War of 1812 and other historical items related to life in Baltimore during that time period.

So, where is the original Star Spangled Banner flag located? Just a short drive from Baltimore, in Washington D.C. 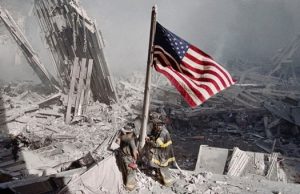 The 9/11 flag is the unofficial flag of our modern times. Famous for being flown over Ground Zero after the September 11, 2001 attacks, this flag has served as a reminder of not only the tragedy itself, but of our nation’s identity and its ability to come together and persevere through adversity.

The 9/11 flag has been used as a traveling exhibit many times, but it can typically be seen as part of New York City’s September 11th Memorial. In 2012, Flag Day became a very healing occasion, as the 9/11 flag was transported to the Flag House Museum in Baltimore to have some of the Star Spangled Banner’s threads sewn into its fabric.

When planning a tour of America’s most historically significant sites, most of us think of the Washington Monument and Lincoln Memorial in Washington D.C., the Liberty Bell in Philadelphia, or even the Paul Revere House in Boston. Thoughts of seeing the nation’s flags are often overlooked, likely because most people don’t know where they are or that they are even available to be seen.

So, when you make your way on a tour of United States historical sites, take the time to visit some of the flags that symbolized what America was, what it is, and what it wants to be in the future.