It seems like a simple quest, searching for the oldest national flag in existence. In reality, the actual historical trail gets much murkier. Legends, national heroes, personal standards, and religious visions all figure into a much more complex picture.

Just to make everything more interesting, the ancient tradition of heraldry, both personal and family, complicates the issue. From the foggiest scraps of historical records emerge the usage of flags and symbols to identify people and tribes. Official adoption of those symbols by larger groups comes much later, and it is harder to trace the actual beginning of a flag as national identity. 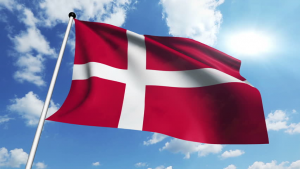 One version of history is easy enough to accept. The Dannebrog, the national flag of Denmark, has been in continuous usage since a battle in 1219 AD.

The legend is a little richer in romantic details. On June 15th, King Waldemar II defeated a force of Estonians with a banner that descended from heaven above (or so the story goes). It is interesting to see this legend falls into the formulaic vision of “under this flag you shall be victorious,” which was a common religious metaphor of the age. With a strange twist, though: “cross from the sky” type miracles were much more common in the Iberian peninsula, where clashes between Christians and Moors were not unusual.

This was the Dannebrog, the flag of the Danes, or simply “the red flag.” Simple and elegant in appearance, it features a brilliant white cross against a red background. Through the course of history, this particular design was also used by the Portuguese Order of Christ and by the Knights Hospitaller from the Baltic states (both crusading orders). 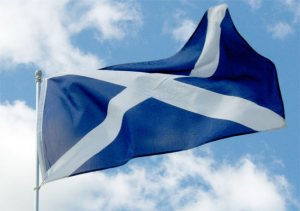 Contender #2: The Saltire of Scotland

The white-on-blue X-shaped cross of Scotland is intensely familiar to most people, if only as part of the combined heraldry that makes up the modern Union Jack. It can also be seen in the provincial flag of Nova Scotia (a.k.a. New Scotland) in Canada.

Much like the Scots themselves, the history of the Saltire itself is contentious and contrary. What is documentable and historically accurate is that the Saltire has been in continuous usage since 832 AD, in one way or another. And, much like the Dannebrog, the Saltire has its roots in an ecstatic vision.

The night before a huge battle in 832 AD , the Pictish King Angus II was preparing for a clash with the English King Aethelstan. In the midst of planning and strategy, Angus was struck by a vision of St. Andrew (soon to become the patron saint of Scotland). The martyred saint promised victory for the outnumbered Picts, and the dream bolstered King Angus II’s faith and hope in the coming battle.

The next day, Angus’ troops were struck by the vision on a massive white Saltire blazoned against a brilliant blue sky. Heartened by the omen, the Picts vanquished their enemies, and the Cross of St. Andrew began its association with Scotland.

Which One Is Older?

The difference here is subtle. The Saltire simply is older. But, with its inclusion in the Union Jack in 1603, with the union of England and Scotland, Scotland is no longer its own independent territory. Inclusion has done nothing to nullify the rich, bloody, and fascinating history of Scotland, but its inclusion means that it is not an independent state. The Danish flag has been used continuously to represent a single, discrete national entity for over 700 years.

Either way, both flags have impressive and heroic pedigrees. But there are other contenders with equally impressive historical lines. 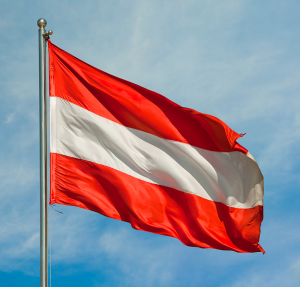 The flag of Austria.

Though its roots are in a dynastic family and not an ecstatic vision, the flag of Austria is both very old and very rich with its own legend. Medieval times were brutal to say the least, and the origin of this banner is nothing short of gory.

The tale begins in 1189 AD during the Siege of Acre (in modern Israel today). Duke Leopold V of Austria was entrenched in a particularly vicious and bloody series of conflicts. When he finally could lay down his sword, his pristine white surcoat was completely drenched in the blood of his foes. On removing his sword belt, a single wide white swathe was revealed: a design so striking that Leopold adopted it as his personal heraldry.

Though used continuously in one form or another (mostly as a family crest), it was finally adopted as the national flag of Austria in 1230 AD. So, while being extremely old in its inception, its official usage came much later than both the flags of Denmark and Scotland.

Simple designs last the longest and remain the clearest in people’s memories. It makes sense for a couple reasons. Clear color blocking schemes like straight lines and crosses are rudimentary enough for even illiterate peasants to recognize and replicate.

It is for this reason that the legends––the spoken tales––of these flags stretch further back through time than the written records we use to authenticate true historical records. Regardless of their origin story, each flag has an intriguing past with both practical and mystical aspects flavoring the tale.