Join or Die: The Flag That United the Colonial Settlers 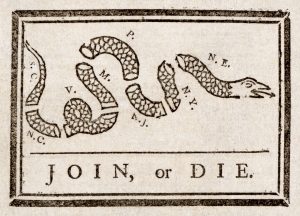 Before the American Revolution, the political temperature throughout the world was shaky all around. France and Britain were in competition to be the most powerful nation in the world, the American Colonies were still settling into their new homelands, deciding if they should expand west or finally organize a revolution to throw off British rule.

The French claimed the entire Mississippi basin extending from the Gulf of Mexico into Canada. Britain and France had long debated over the borders of their territories in the Americas. Austria changed allegiances, Prussia was backing Britain ... everything was changing.

At the same time, Benjamin Franklin was getting concerned about future of the colonies. He realized how disorganized they were and just how powerful they could be if they united as one voice, one military and political force. Each of the colonies had been going in their own direction, drifting further apart. On May 9, 1754, the Pennsylvania Gazette printed the first political cartoon ever printed in the U.S., created by Franklin.

The flag depicted a snake in segments, each labeled for the colonies, with New England representing one section, and the remaining 7 pieces in order of how they are positioned on the coastline. (See image on the right).

The cartoon was originally done on wood, then printed. Interestingly enough, if you look at the shape of the snake, it loosely represents the eastern coastline. It is considered a “cartographic cartoon” because of this, which was again the first of its time.

The reason he had the snake in pieces was to represent the separation and drifting apart of the colonies. Just as a snake would die if it was in pieces, the same would happen to the colonies if they didn't unite. In the 18th century, it was a commonly held belief that if you buried the pieces of a snake before sunset, it would reconnect and become whole the next dawn. Franklin wanted to unite the colonies before that happened.

His cartoon became a rallying standard for the colonies in the French and Indian War. It served as an inspiration for unity and turned their focus on to battling a common enemy. In the years leading up to the Revolutionary War, the slogan was used to unite the colonies with the British, to the point that they passed the Stamp Act in 1765 which was a tax the colonists paid to the crown for every printed piece of paper.

Once the colonists were united, the Join or Die flag became a standard for freedom. The Revolutionary War saw many flags, battle cries, and other inspiring propaganda, but Franklin's Join or Die snake cartoon was by far the most widely recognized and inspiring of all of them.

Throughout our nation's history, the Join or Die slogan and flag have resurfaced at various points. The North used it in the Civil War to promote unity of the states. Even in the 2000 election, the Republicans used it to push for party unity. It just proves that Franklin knew how to tap into the American hearts and psyche with his clever depiction, and that kind of propaganda lasts as long as the country stands united.