How Many Flags Over Texas?

It’s a good question. Texas has been governed by six different nations over the course of its history, it has its own state flag, and there is the matter of Texas’s constitution allowing it to split four new states away from itself, which would all require new flags for themselves. We’ll get into that part of the problem later.

First, let’s discuss the flags that have already flown over the state. Texas was originally settled by Europeans around 1685. The French established a colony called Fort Saint Louis, which they had originally meant to place on the Mississippi River. The colony only lasted a few years before collapsing, but its presence meant that the Spanish felt they had to reestablish their claim, having made landfall and a map a century and a half earlier, then largely ignoring it.

The Spanish thus constructed missions in East Texas, which were routed by native resistance. They tried again after the French started settling southern Louisiana, establishing San Antonio in 1718 as the first civilian Spanish settlement in Texas.

This gives us two of the famous “Six Flags Over Texas”: Spain (twice: 1519 – 1685, and then again from 1690 – 1821), and France (from 1685 – 1690). Which flags were they, though? Spain used several different flags during its exploration of the New World. One of the most commonly seen on “Six Flags” displays, since it was chosen by the Texas Centennial Exposition committee, is the Castile and Leon royal banner, consisting of two lions and two castles: 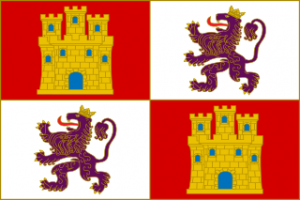 Nice, right? Unfortunately, Spain wasn’t using this flag during the period they were in Texas – it’s the banner used by Cortez during the conquering of Mexico. They mostly were using this one at the time:

The French flag is even less clear. There was no official national flag of France, at the time, and the flag carried by the leader of the colony is unclear. A few proposals were made, including one with three white or gold fleur-de-lis on a blue banner.

Two down. Next is Mexico, which controlled the area from 1821 – 1836. Its flag was adopted in 1823 and is more or less the same today, barring some artistic variance:

Nowadays you are more likely to see a stylized eagle in place of the realistic one depicted here. Very little controversy or confusion with this flag.

Next, of course, the state of Texas itself. It has had two different official flags. The first is extremely straightforward - a yellow star on a blue banner. It only lasted from 1836 – 1839. It was then replaced with the current flag. Everyone knows this one.

The Confederate flag, flown over Texas between 1861 – 1865, brings us back to vagueness and confusion again. Their flag went through several changes during their existence, from the Stars and Bars, which was never actually officially adopted by the Confederacy, but nonetheless was used for two years; to the Stainless Banner.

The one most commonly seen in displays is the Stars and Bars; as mentioned, this was never legislatively adopted as an official flag, largely because it resembles the Stars and Stripes of the United States too strongly. This made it unsuitable as a war banner, to say the least.

After the Civil War, the United States controlled Texas.

This brings us to the point of how Texas actually entered the Union. On December 29, 1845, statehood was granted to Texas, with the proviso that it be a slave state. The Missouri Compromise, however, forbade slavery north of the 36-degree 30-minute northern latitude line, as well as west of Missouri. The new territory extended further in both directions. In order to overcome objections to the violation, Congress passed a joint resolution that allowed Texas to split itself into as many as five states.

Technically, it allows Texas to split off up to four new states, and the remainder would retain the name and statehood of Texas, but that’s just wording. The idea with this compromise was that any new states would follow the Missouri Compromise rules according to location; new states above the restriction would automatically be free states, while any remaining in the area where slavery was still allowed would hold a popular vote to determine their slavery status.

In 1850, with the admission of California to the United States as a free state, Southerners wanted to split off an additional slave state from Texas to balance it. Instead, Texas was given ten million dollars in exchange for ceding its territory north of the line and west of Missouri, which eventually became parts of Colorado and New Mexico. A few years later, the Kansas-Nebraska Act repealed the Missouri Compromise and, thus, the question was settled for all time.

Except that the Civil War happened, and, with its end, slavery was no longer allowed in any state, which meant that Texas’s ability to split into new states was unneeded. However, and this is the important part, it was never repealed. Technically, Texas can split off new states if it wants to do so.

Ordinarily such a move would require an act of Congress, which is fine; Congress has been doing that sort of thing for a long time. If it wanted to split a state after its ratification, it only needs permission from the state’s legislation. That’s how the nation was built in the first place, after all.

Land purchases were made, and then, after some time to let new settlers sort of eke out an idea of where to live and what to concern themselves with, Congress would divide them up into various states and those states would start concerning themselves with legislature and government. But it seems that Texas can do this without any permission from the federal government; indeed, without any input whatsoever.

Related to this ability is the common belief that Texas can secede from the United States at any time; this statement is more plainly false. (See above note on the Civil War and how that is not allowed.) This seems to stem from Texas’s long history of independence and the fact that it entered the Union as a sovereign republic nation. However, it was not the first republic to join the Union, nor the last. In fact, the last republic to do so was a kingdom prior to that, and Hawaii has no legal right to secede, either.

Back to the problem of the division, though. There is the issue of how to divide Texas: probably along county lines. Nate Silver came up with a method of dividing the state up into politically sound parts in 2009. He considered things like population density and demographics, to wind up with: 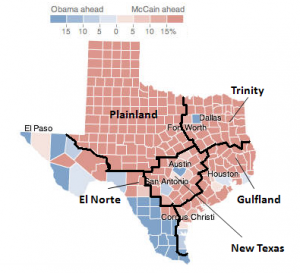 New Texas is where Austin, the current capital of Texas, is located. It would be the technical remainder of the previous state of Texas and thus retains the name. Trinity has Dallas and Fort Worth; Gulfland has Houston and Corpus Christi, and would rely largely on offshore oil drilling for its economy; Plainland and El Norte would each have only about two and a half million people. This would change the political balance of power of the United States, although perhaps not as much as some might think, especially given the divisions outlined above.

So, all we need to know now is what each of our new states wants to have for its flag, right?

Not quite. There are several other proposals for division that have been raised and denied in the past; any of these previous attempts would have an equal claim for their own flags as well. For example, the best-known effort was in the late 1860s, for a vertical division into East and West Texas, which was presented to Congress but not ratified. An attempt to break off the panhandle into the state of Jefferson was floated in 1915 but also went nowhere. It’s been tried several times, most recently in the 1990s.

So, sure, on paper it looks like Texas has a unique ability to stymie Congress and suddenly add up to four stars to the flag. Can it, in fact, do that?

Now we run into the legal ramifications of precedent and what that means for Texas. In order to see what the meaning of “state” is, we turn to the Supreme Court’s decision in Escanaba Company v. the City of Chicago [107 U.S. 678 (1883). In this case, Chicago was legislating when certain drawbridges could raise and lower, and the Escanaba Company determined that the schedule was inconvenient to them and their profits. So they sued. In the briefing, Justice Stephen Field acknowledged that states have certain rights, and that they are superseded by federal jurisdiction where necessary, in this case covering free trade between states, which Escanaba claimed was being overruled by Chicago. It eventually comes to this phrasing in the opinion of the court:

Whatever the limitation upon [Illinois's] powers as a government whilst in a territorial condition, whether from the [Northwest] Ordinance of 1787 or the legislation of Congress, it ceased to have any operative force, except as voluntarily adopted by her, after she became a State of the Union. On her admission she at once became entitled to and possessed of all the rights of dominion and sovereignty which belonged to the original States. She was admitted, and could be admitted, only, on the same footing with them. The language of the resolution admitting her is "on an equal footing with the original States in all respects whatever"... Equality of constitutional right and power is the condition of all States of the Union, old and new. (Escanaba Company v. the City of Chicago [107 U.S. 678 (1883)])

Meaning what, exactly? The last line is the important one: equality … is the condition of all States of the Union, old and new. This reveals that regardless of what a state’s constitution contains, the very fact that it is a state constrains it to abide by the rules and regulations that all the other states abide by.

So, the legal result is clear: Texas does not get to just produce four additional states at whim, much though some people might like it. This means, unfortunately, that there will be in this case no additional state flags produced, although designing them might be an interesting project for a rainy afternoon. If the reader does so, please remember that flags with animals on them are popular for American states and that none of them so far have any armadillos. Now is your chance to rectify this oversight!

Maybe another one that is nothing except tiny gold stars strewn on a blue field, to reflect the previous French flag above? Certainly, though, the flag that is the most needed is a jackalope rampant, probably on a red and blue field. This would cement the ambitious reader with fame in the vexillology community for all time.