You can’t say they didn’t make any effort. There are plenty of designs that didn’t make the official cut, although even the official flag has been modified twenty-six different times. Mostly, of course, to denote new states added to the canton as stars, which always necessitates a redesign of the pattern, some more successful than others.

Rather than a step-by-step showcase of how the field has changed and how it’s likely to change again if new states are ratified, let’s take a look at some of the more exotic offerings our forefathers were planning on for the flag.

We’ll start with a classic: the original “Grand Union” flag, called the “Continental Colors” as well. It has the basic elements: thirteen alternating red and white stripes, and a canton in the upper left hand corner at the hoist, but the star field is not yet a feature. The Union Jack resides there instead, as this was a common feature for Great Britain’s colonies to sport.

Other similar variations on the theme include the “Betsy Ross” flag, although, honestly it’s not clear that she ever had anything to do with the flag––the story that she had sewn it wasn’t presented until nearly a century later.

Definitely great, though. The Cowpens flag is almost the same thing, except with twelve stars in the circle and one in the center; it was carried over the Battle of Cowpens by the 3rd Maryland Regiment and is depicted in the famous painting The Spirit of ’76 by Archibald MacNeal Willard.

The Great Star Flag has twenty stars, arranged in a star shape: 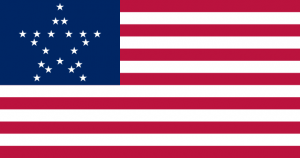 Which is awesome, but didn’t last long, only flying over the Capitol Dome for six months or so, before more states came in so it had to change again. A later attempt to arrange the stars in a star used different-sized stars and looks, arguably, even cooler: 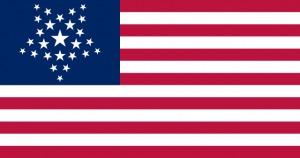 It should be pointed out that none of these designs were technically ever federally-mandated designs: Congress didn’t designate an actual pattern to the stars on the canton until the forty-eight star flag in 1912. In fact, the colors of the flag weren’t standardized until 1934, which is something you would think even Congress would have gotten around to sooner.

While those are interesting, today’s blog consumer demands more. What about some of the flags that never even made it to non-official status? Glad you asked, straw reader! Let’s look at some now!

Here’s the Brandywine flag, named for Captain Robert Wilson’s company in the 7th Pennsylvania Regiment, after it was carried in the Battle of Brandywine in 1777: 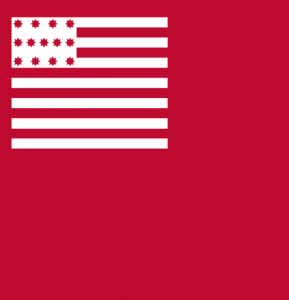 Yes, it’s square with an entire other flag in the canton. Bold, indeed!

The stars are arranged in a “natural pattern,” not in a “sewn on while on horseback” pattern like you might have first thought.

George Rogers Clark, the “Conqueror of the Northwest,” had his own flag that was a contender: 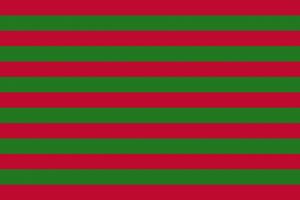 Pretty striking, but perhaps a bit of an eyestrain? It’s probably not even actually the colors he marched under. Some scholars say the red and green may represent the wampum presented by a Piankeshaw chief, symbolic of the local Wabash River.

How about the Guilford Courthouse flag?

Well, it’s probably not even really a flag, technically speaking; at least, never meant to be presented as an actual consideration for a national flag. It was common practice for soldiers and sailors to make a flag that was evocative of the nation’s flag but distinct enough to use as a regimental or company flag. The reversed colors, the shape, the elongated canton, the eight-pointed stars―all point to this being exactly what was going on here. Too bad, too; it’s definitely a memorable design.

The Easton flag, now being used to represent the city of Easton, Pennsylvania: 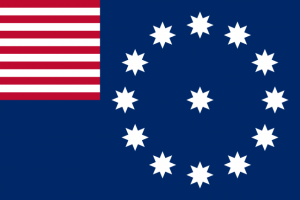 A very classy, inverted design. This was used as the company flag for Captain Abraham Horn during the War of 1812, and some think it might date from that era rather than the frequently claimed 1776, hoisted at the reading of the Declaration of Independence on July 8th.

There was no shortage of fascinating designs provided by the vexillologists of our past. As the country’s needs evolve, perhaps the flags of our future will be just as intriguing.