Service Flags of the United States 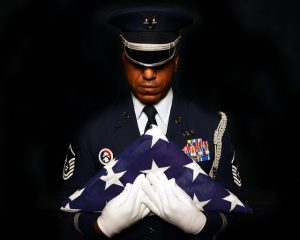 More Than Just a Flag

The freedom we enjoy as American citizens has not, nor has ever, been given freely. It was hard fought and hard won, requiring enormous sacrifice on the parts of military service members and their families. Today that freedom is still hard fought, and the sacrifices made just as enormous.

Making sure we honor current American service members and veterans is essential. Whether you donate your time or your money, or even only fly a new flag in support of their service, we can all do more to show how grateful we are to those extraordinary individuals who give everything of themselves to make this a better country for everyone else.

Take a moment to read below and understand some of the different service flags of the United States. Knowing what the different flags mean is a simple, yet important way to honor and respect those who serve.

The Service Flag or Banner

The service banner is an official display authorized by the Department of Defense that the family of service members may fly. Defined by a white field and thick red border, a large blue star is present for every family member who gave service during any period of war or hostilities. A gold star outlined in blue represents a relative who died while in service.

During World War II, it became commonplace to display the service flag. Almost every private residence, as well as many organizations and businesses, began to display these banners proudly to demonstrate how many family members were serving in the armed forces.

In 1942, the veteran’s service Blue Star Mothers of America was founded, quickly becoming an integral part of the movement to provide military service members serving overseas with care packages. Additionally, it became one of their core missions to provide aid to families undergoing hardship because of a son or daughter serving in the war.

The service flag is made for indoor use and should be displayed on the inside of a window in the front of the home facing outward.

The POW/MIA Flag was created for those Missing in Action and Prisoners of War during the Vietnam War. The flag is black with a white circle in the middle. There is a black silhouette of a concerned man, a watch tower with a guard holding a rifle, and a strand of barbed wire. Above that, in white letters, are POW and MIA with a white star. Underneath the disk is a black and white wreath above the words YOU ARE NOT FORGOTTEN.

Each branch of the Armed Forces has their own distinct flag with a long and distinguished past. The flags represent many decades of honor, tradition, and service. It is important to recognize and understand the differences when paying respect.

In addition to the specific service flags and Armed Forces branch flags mentioned above, there are some holidays in which the American flag itself may be used to honor the service of American military personnel. Take a look at some of these important days:

Military service is the bedrock of  the United States of America’s freedom. Without the men and women who serve in uniform, the United States would quickly become a shadow of its true self. The rights and privileges we take for granted every day would become meaningless, and the future would be a bleak one. It is a shuddering vision, although it provides all the more reason to thank and honor service members, veterans, and their families for all that they give. Recognizing service flags, and understanding something of their past, is an important way to give thanks. Fly a flag and honor those who serve.