Flags are easy, right? A couple of colors on a rectangle, maybe a quick symbol … call it a day and hit the links. Sure, if all you’re looking for is to disappoint everyone in your entire country. Why not shake things up a little, like these visionaries did?

We’re actually going to limit this a bit to just the most unique symbols on flags, rather than the most striking designs, like, say, Nepal’s. 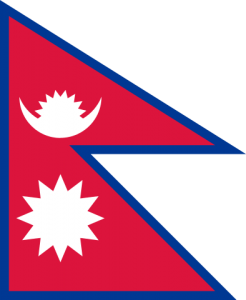 (That’s the whole thing, by the way. There’s no white beyond the blue. It’s the only non-quadrilateral flag of a country in the world.)

Instead, we’ll just take a look at a few flags sporting unique symbols. We’ll start with Albania, because, well, look at it: 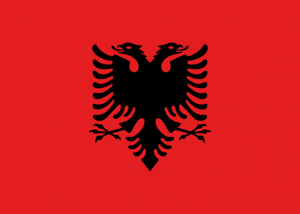 A two-headed eagle? Yeah, nobody’s going to kick Albania around the schoolyard with that for a flag. Technically, it’s not quite unique―it’s a common heraldry motif denoting an empire, Ivan the Terrible had it on his coat of arms, the Principality of Montenegro has it on its flag―but it’s so awesome we’ll allow it here. 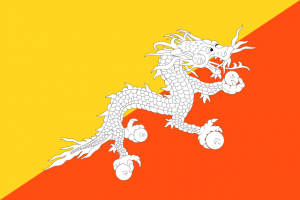 Druk the thunder dragon! Yeah! Note, the dragon is holding a jewel in each of its claws. These symbolize the wealth and security of its people. The orange is for the Buddhist founders, and the yellow is civil and temporal authority as embodied by the Dragon King. Druk is technically supposed to be green in early renditions, but it was apparently a very pale green; he’s now white, symbolizing purity of thought.

Kenya also celebrates its heritage with its flag: 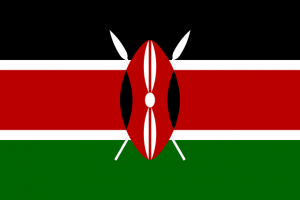 Very striking and a great use of iconography. The black is for the people of Kenya, the red for the blood spilled in their battles for independence, and the green is for the country’s natural wealth and beauty. Weaponry is not uncommon on flags, but the traditional Maasai weapons of short spear and cowhide shield are seen nowhere else.

Weaponry, as mentioned, is on other flags. Here’s a very distinct use on Mozambique’s flag: 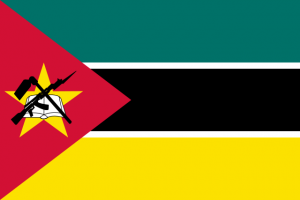 Here the colors are similar in use to Kenya’s, with the addition of yellow for the country’s mineral wealth. The Marxist star is for, well, Marxism, but also internationalism. The book is to signify the importance of education, and the hoe symbolizes the country’s agriculture. The AK-47 signifies defense and vigilance.

Gibraltar is really more of a state flag, but despite our getting all technical with Albania, we’re going to include it and the next one purely on the strength of the design. We don’t think you’ll be too upset. 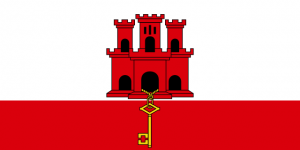 Pretty boss, right? Two-thirds white bar, one-third red bar, red castle, and a gold key overlapping the bottom red bar. Signifying, naturally, the British territory’s status as the gateway to the Mediterranean Sea. The castle is a symbolic representation of a fortress, but doesn’t actually resemble any in the area.

Not quite a British territory―the term is Crown Dependency, which means it’s basically self-ruling, but the British government is ultimately responsible for them―the Isle of Man: 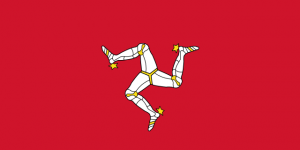 Now, that’s how you do a flag. Giant swath of color so as to not distract from the triskelion running across it. An old, old symbol used by the Norse, Celts, and Mycenaeans, among others, it’s not entirely clear why it’s on the Isle of Man’s flag. But, while it’s there, the three legs represent the Sun, the Seat of Power, and Life.

The island nation of Sri Lanka didn’t have any hesitation when it came to deciding what goes on their flag: Pure Awesomeness in the form of a lion wielding a sword. 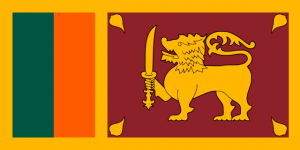 We’ll finish off here with a thematically related flag, even though we’re sort of backsliding into non-country flags. An Orblast is an area in Russia sort of equivalent to a province or region: larger than a state, but not independent. This flag is for Yaroslavl Orblast: 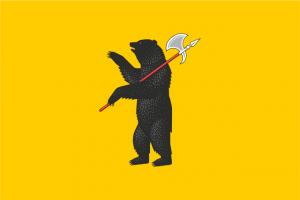 And it just doesn’t get any better than that. We like to think of this bear and Sri Lanka’s lion as being best friends.