Top 8 Moments in the History of the American Flag

There have been many unforgettable moments in our nation’s history, but there are a handful of moments specifically related to the American flag that really stand out. Some of these moments are simply fascinating historical happenings, while others represent significant events that helped shape the United States of America as a nation.

With that in mind, let’s discuss a healthy dose of each type of moment and explore a little bit more about one of our nation’s greatest symbols. 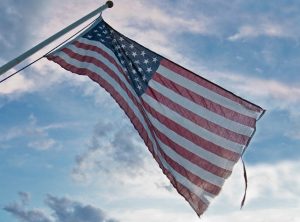 Moment #1: The First Flag Is Sewn

If you hear the name Betsy Ross, you may not immediately remember that she was the woman who sewed the very first Stars and Stripes American Flag. Historical accounts say that Ms. Ross, who was a sought-after seamstress from Philadelphia, was hired by George Washington himself to sew the initial American flag featuring the stars and stripes. Because of this, it’s fair to say that Betsy Ross’s name is truly sewn into the fabric of American history.

Originally, tradition dictated that a new stripe would be added every time a new state was admitted into the union. When five more states were added in 1818, this tradition came to a screeching halt. Congress passed legislation stating that 13 would be the fixed number of stripes on the flag, and, rather than continuing the stripe-adding tradition of recent years, a star would be added to represent each state.

It may seem a strange custom to name a flag, but there is actually a rich history of doing just that. In 1831, Captain William Driver referred to the Stars and Stripes banner as “Old Glory.” It may be that Captain Driver felt a deep kinship to the flag because of its presence on so many of his ocean voyages over the years. Whatever the reason, the name stuck, and the American flag is known as “Old Glory” to this day.

The Battle of San Juan Hill was a brutal battle that took place during the Spanish-American War in 1898. On the day of this battle, Colonel Theodore Roosevelt led his men to victory over Spanish forces, after which he and his “Rough Riders” raised an American flag and posed atop San Juan Hill for one of the most famous photos in our nation’s history.

Moment #5: Raising the Flag Over Iwo-Jima

If there is one photograph that comes to mind when you think of the American flag, it’s probably this one. Taken in 1945, “Raising the Flag Over Iwo-Jima” was so well-received that it actually won the Pulitzer Prize for photography. 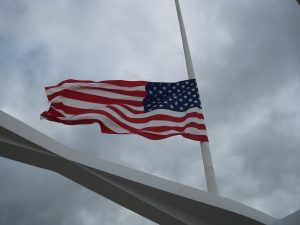 On certain days of the year, you look around and see flags flying at half-staff. Few people realize that the half-staff flying of the flag at specific dates and times, including Memorial Day, Peace Officers Day, for 10 days following the death of a Vice President, Speaker of the House of Representatives, Supreme Court Chief Justice (active or retired), and for the 30 days following the death of the President or any former President is a necessary protocol.

When Neil Armstrong became the first man to walk on the moon, he made a famous statement about how this accomplishment was “One small step for man, one giant leap for mankind.” Almost everyone remembers these words. What they also remember is the moment (or at least a picture of the moment) when Armstrong and fellow moonwalker Buzz Aldrin staked the American flag to the moon.

Moment #8: After the Collapse of the World Trade Center

When the United States was attacked on September 11, 2001 and the World Trade Center buildings collapsed, Americans were devastated. Out of this darkness came a photograph of firefighters lifting the flag high above the ruins left behind. This picture painted an image of bravery and courage that served as a symbol of comfort and unity in the days, weeks, and months after the attack.

There are so many moments in American history associated with the American flag, it’s difficult to narrow it down to just a few, let alone put them in any order. We remember these moments in time not only because of the significance of the events themselves, but because of what our flag represents to us as a nation and as individuals.