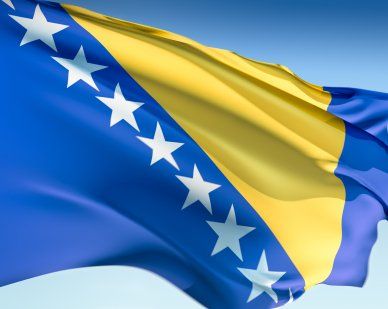 The flag of Bosnia has seen many changes throughout its history. Known as the Tvrtko flag, after the Bosnian King of that name, the first flag of this nation originated in the 14th century and featured a coat of arms on a white background. In 1760, a new flag emerged with a green background and a white crescent moon and star in the center. The crescent moon and star were changed to yellow and made to face the opposite direction in 1830. In 1878, for a brief two months, the same flag was used but the crescent moon appeared more curved. In the same year, Bosnia became part of the Austria-Hungarian Empire and the flag was changed to one with two horizontal stripes of red and yellow. From 1945-1991 Bosnia, as part of Yugoslavia, had a flag with a red background and a small flag in the top left hand corner. This small flag had 3 horizontal stripes of blue, white and red, with a coat of arms in the center and a thin white border surrounding it. With the nation’s independence a new flag emerged in 1991 featuring a blue background and a yellow isosceles triangle in the right center. To the left of the yellow triangle is a line of white stars.

Our top-quality Bosnia Herzegovina flags conform to all official specifications. Emblems and designs are executed with the highest possible degree of accuracy in regard to detail, color shades, placement and proportion to flag size.