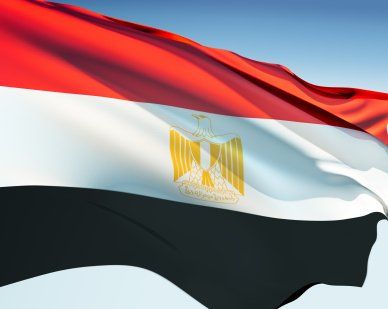 During the 19th century, Egypt was part of the Ottoman Empire. Its flag at the time was red with a white crescent moon and star in the center. From 1805-1922 the flag remained red with three white crescent moons and star in a triangle position on the left side. From 1922-1952 the flag became green with the moon and three stars in triangle formation. In 1952 a flag with three horizontal stripes (red at the top, white in the middle and black on the bottom) was introduced. It had a large emblem of the eagle of Saladin in the center. From 1972-1984 the same flag was used with a smaller emblem in the center of the white stripe of the flag. In 1984 the emblem was changed slightly and the flag has remained the same.

Our top-quality Egypt flags conform to all official specifications. Emblems and designs are executed with the highest possible degree of accuracy in regard to detail, color shades, placement and proportion to flag size.