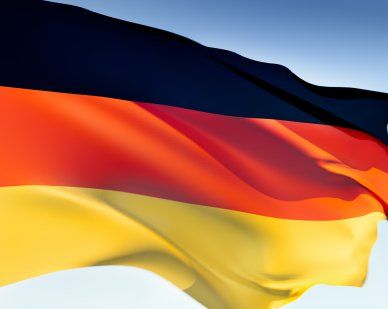 In the 13th and 14th centuries, Germany was part of the Holy Roman Empire and had a red flag with a white cross. In 1866-1918 it had the flag of the North German Confederation. It had 3 horizontal colors; black at the top white in the middle and red at the bottom. From 1919-1933 a new flag with three horizontal stripes was used. They were black at the top then red, and yellow at the bottom. From 1920-45 the Nazi flag was flown. It was red with a white disc in the center. In this disc was a black swastika. In 1949 West Germany flew the flag that we know today. It had 3 horizontal stripes of black at the top red in the middle and yellow on the bottom, with an emblem in the center. East Germany used the same design with an emblem in the center. With the reunification of Germany in 1989, the flag without the emblem was used.

Our top-quality German flags conform to all official specifications. Emblems and designs are executed with the highest possible degree of accuracy in regard to detail, color shades, placement and proportion to flag size.