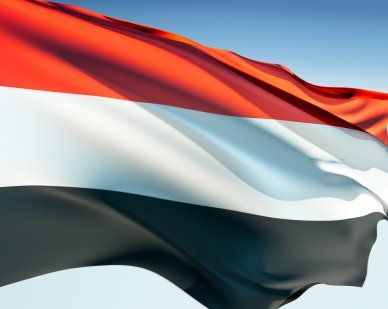 Formerly divided into North and South Yemen, North Yemen originally had a plain red flag. This lasted from 1918-1923. From 1923-1927 a white Arabic inscription was added in the center. From 1927-1962 the red background remained the same but the Arabic inscription was removed – a central white saber with a star above it along with a small white star in each corner took its place. From 1962-1990 North Yemen became the Yemen Arab Republic and had a flag with three horizontal stripes of red, white and black. There was a green five-pointed star in the center. The South Yemen flag had the same stripes but depicted a sky blue triangle on the left side with a red star within it. Since 1990, the Yemen flag has featured just three horizontal stripes.

Our top-quality Yemen flags conform to all official specifications. Emblems and designs are executed with the highest possible degree of accuracy in regard to detail, color shades, placement and proportion to flag size.