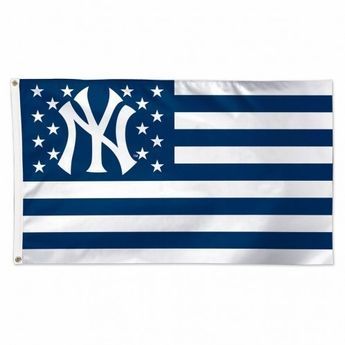 The New York Yankees are a professional baseball team based in the borough of the Bronx, in New York City, New York. The Yankees are a member of the Eastern Division of Major League Baseball's American League. One of the American League's eight charter franchises, the club was founded in Baltimore, Maryland in 1901 as the Baltimore Orioles, moved to New York City in 1903, then becoming known as the New York Highlanders as well as the New York Yankees, and becoming solely known as the "Yankees" in 1913. From 1923 to the present, the Yankees permanent home has been Yankee Stadium.

AmericanFlags.com is pleased to carry officially licensed New York Yankees flags in a variety of styles and sizes. Our MLB flags are made according to official specifications and are proudly made in America!

Officially licensed 3' x 5' Deluxe New York Yankees Stars and Stripes flag with premium durable fabric, two grommets and quality stitching including a quad stitched fly end. The vibrant imprint is 100% show through to the backside with a long lasting color-fast dye. Fly on a flagpole or hang it on a wall.
More Information
Reviews
Reviews
Write Your Own Review