A Rattlesnake on the American Flag Instead of an Eagle? 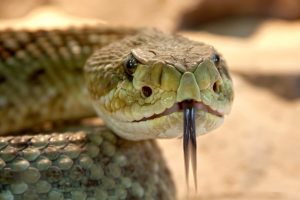 Was our country’s national symbol almost a poisonous reptile rather than the eagle we’ve all come to know and love? If Benjamin Franklin had his way, this may very well have been the case. In fact, Franklin didn’t even like the eagle, so much so that he believed the majestic bird of prey was “a bird of poor moral character.” The rattlesnake, on the other hand, was a fierce, but honorable creature, never attacking unless provoked and never surrendering unless a fight was over.

An Early Symbol of National Identity

In 1754, Franklin sketched the image of a snake cut into eight sections, each one representing the individual colonies at the time. Under the snake was scrawled the words, “Join, or Die,” which were intended as an appeal to unity during the French and Indian War.

A snake chopped into several pieces may sound morbid, but the image stemmed from a well-known superstition of those days that was based on the belief that a snake that was sliced into pieces could rejoin the living if the body was put back together before sunset. As more newspapers printed this picture, the snake gradually became a symbol of national identity and pride.

The snake was used many times as Americans united over the years. In 1765, the British, in an attempt to pay off the debt they had incurred from the French and Indian War, started the Stamp Act. Many colonists believed that they had thrived despite the British government, not because of them, and, therefore, were not indebted to them.

The colonists soon became known as the “Sons of Liberty,” and the general public became more and more ready to revolt against the British. Once again, Franklin’s chopped-up snake reared its head and made its presence felt as a source of unity and, this time, independence. 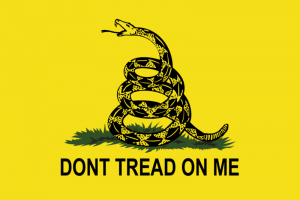 Don’t Tread on Me

The snake symbol eventually spread beyond the newspapers and, by 1775, it was on everything from paper money, to banners, to flags. During its ascent, the snake symbol changed significantly. Rather than being shown as a generic snake, it was now typically depicted as an American timber rattlesnake. Although historical accounts differ as to how and why the now-famous coiled rattlesnake came to represent our country on the Gadsden flag, the ominous and equally now-famous words, “Don’t Tread on Me” send a clear message to all who see it.

Back to Benjamin Franklin

“An American Guesser” anonymously wrote to the Pennsylvania Journal toward the end of 1775, noting that he had seen some drums belonging to Marines with the aforementioned snake accompanied with the same warning.

This anonymous writer went on to explain why a snake would be the ideal American symbol, noting that there were thirteen rattles on the snake, which equaled the number of colonies in America, also eloquently observing “how distinct and independent of each other the rattles of this animal are, how firmly they are united together” and how “one of those rattles, singly, is incapable of producing sound, but the ringing of thirteen together, is sufficient to alarm the boldest man alive.”

This anonymous writer is now widely believed to have been Benjamin Franklin due to his well-known fondness for the rattlesnake as a national symbol.

Why Is It Known as the Gadsden flag?

Franklin may have designed the original rattlesnake symbol, but the flag on which “Don’t Tread on Me” appears is not named after him. That honor was bestowed upon Colonel Christopher Gadsden. According to historical records, Gadsden presented one of these flags to Esek Hopkins, whom Gadsden had chosen as the Navy’s commander-in-chief. Gadsden soon made a copy of the flag and proposed to Congress that it should be the official standard of the head of the United States Navy.

Don’t Tread on Me

You could say that the Gadsden flag and its powerful mantra were initiated in 1776 when Commodore Hopkins proudly flew them when the Navy’s ships set out to sea for the first time in its now-storied history. The Gadsden flag has one of the more fascinating origins of any flag in the world. This flag is in large part distinguished by the message it bears so clearly: We value freedom, and if our freedom is threatened, we will do what is necessary to defend it. Of course, the flag says it much better and more simply.