The Bear on the California State Flag 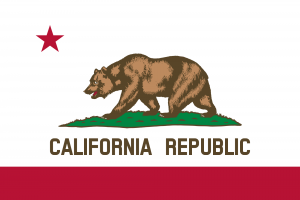 No, the California state flag has a whopping big bear taking up most of its face, meandering toward a single star in the upper hoist side, striding over a red stripe on the bottom of the flag. It’s definitely a bold choice. The only other flags that approach it are probably the Wyoming flag, with an outlined bison containing the state seal, and the Oregon flag, with a single large beaver sitting quietly on the obverse side, and even those are stylized, clearly harmless, and representative beasts, not looking for trouble. Not so the California bear.

In 1846, California was a Mexican territory, and there was the threat that Mexico and the United States of America were going to go to war. A group of settlers in the area decided that if it came to that, they were going to go with America. In fact, they decided not to wait, and went ahead and seized the city of Sonoma themselves.

Of course, they needed a flag to represent the new Republic of California, so they asked one of the settlers, one William “I’m Abraham Lincoln’s Wife’s Nephew” Todd to design it. He took a scrap of brown cloth and some brownish paint (or blackberry juice) and painted a crude representation of a bear heading toward a star. The bear represented strength and power as the biggest, baddest predator on the continent, and the star was reminiscent of Texas’s Lone Star. The combination was entirely meant to strike fear into the Mexican government, and to impress them with the seriousness of the situation.

This was the rough settler equivalent of declaring your house an independent state, then electing a shark mayor and inviting people to debate it via fisticuffs, which made it a little anticlimactic when the settlers found out within a month that the United States and Mexico were already at war. At that point, they replaced the Bear Flag with the Stars and Stripes, and California became an official state a few years later. In 1911, they adopted an updated version of the flag as the state flag. 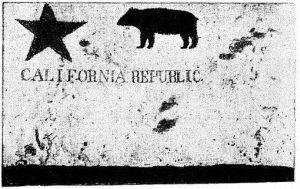 The new flag needed a bear front and center, and hopefully one that looked more like a bear and less like a suckling pig this time. The designers wanted to use an actual bear as reference, but the California golden bear was almost extinct in the area. Luckily, twelve years prior, William Randolph Hearst had begun performing his famous publicity stunts, and one of his first was to bring a live California golden grizzly to San Francisco.

He sent Allen Kelly, a reporter with no hunting experience, to fetch one, and, to everyone’s astonishment, after several months and several close calls, he succeeded. At 1200 pounds, Monarch was the largest bear ever kept in captivity; some sources (well, Hearst) claimed that 20,000 people showed up to see him brought in.

After a few years, though, the novelty wore thin, and Monarch died in 1911. His skeleton was mounted and donated to the Berkeley Museum of Vertebrate Zoology, and his pelt was stuffed and donated to the California Academy of Sciences. It was here that the illustrators were able to make detailed sketches and convert the image to the mighty representation now adorning the state flag.

Some state flags are clearly just placeholders until something interesting happens. Fortunately, California seems to have had that covered for over a hundred years.

Does your own state flag have as interesting a history? Keep an eye out for future explorations; perhaps you’ll find out soon!