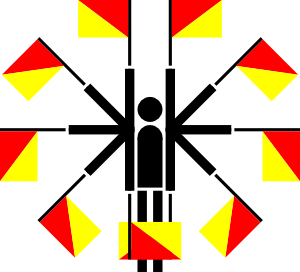 Did that get your attention? It should have, because that motion with the flags in that position is the internationally designated semaphore signal for “Attention!” It also means “Error,” but we can skip that for now.

Semaphore flags are the end result of a signaling system developed in the late 1600s by Robert Hooke (of microscope fame). He presented it to the Royal Society, but they failed to do anything with it. A century later, it was adapted and used by Claude Chappe in France, eventually covering much of the country and allowing for very rapid transmission of information across vast distances.

Chappe’s design was a tower with a large crossbar at the top, with arms at either end that each could be arranged in seven different positions. The crossbar itself could assume four different positions, allowing for a total of 196 different configurations. This allowed for a sophisticated system of phrases and messages to be sent to another tower within extreme visual distance, which would then copy it, allowing the next tower to copy it, and so on.

These towers were so successful that the French government initially rejected Samuel Morse’s telegraph on the basis that the wires could be too easily cut. Eventually, of course, they fell out of favor, largely because they were pretty much useless at night, and when they could be seen, everyone could see them, so secret signals were suddenly no longer as much so.

Before that time, though, they inspired the development of the smaller version used shipboard to great effect. Those were flags, and that’s why we’re here. 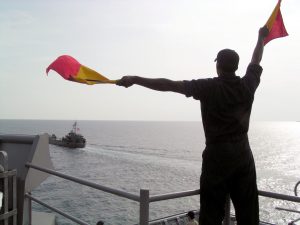 Semaphore flags are (if on a ship) red and yellow or (if on land) blue and white. The colors are split diagonally with the red hoist-side and on top. (Although the colors don’t matter: the land-based version is blue with a white square in the center. It’s just to make the arm position more obvious.)

The arm position is what gives the letter – or numeral, depending on what you need to signal. The flags do not overlap unless they are in the “rest” or “space” position, in which case they are directly in front of the signaler with both arms straight down. The alphabet is laid out similarly to a wheel: each arm can take one of eight positions, and the combination of the positions of the two arms denotes the letter. Six of the letters require an arm to be brought across the body so the flags are on the same side, and there is a unique signal to denote that the signaler is switching to numbers. (The switch back to letters is denoted by signaling “J”.)

Starting in the rest position with both flags in the down position, the right arm rising to low gives “A”, and rises a quarter-rotation for B, C, and D. Then the right arm drops back to down, the left arm goes to the high position for “E” and follows down to “G”.

Easy enough, right? Then “H” is done by the right hand being straight out and the left hand going across to the low position underneath. Keep your left hand there for “I” while raising the right hand up to the high position. Skip “J” for now; “K” continues the same circle except for convenience’s sake you swap arms. That is to say, right hand in the low position, left hand in the up position. “L” through “N” continue the sweep, then you move your right hand up one more to straight out and cross your left hand over again. Then the pattern continues – it’s actually much easier than it sounds from just reading it.

We did imply we would come back to “J”. That’s a unique position where your right hand is straight up and your left hand is straight out. This may seem odd, but it’s a consequence of assigning numbers to the first series of letters; the signal to switch back has to be significantly different so the intent is clear.

Semaphore is not outdated quite yet; it has significant use as a quick signaling system for areas – such as in the mountains or onboard ship – where visual clarity is good but the distance between participants may be too great for verbal clarity. The Royal Canadian Mounted Police have used it (without flags, unfortunately) for years in such situations.

Of course, the most famous use of semaphore is probably Monty Python’s depiction of the classic British pastime of reciting Wuthering Heights completely in semaphore, as Emily Bronte probably originally wished.